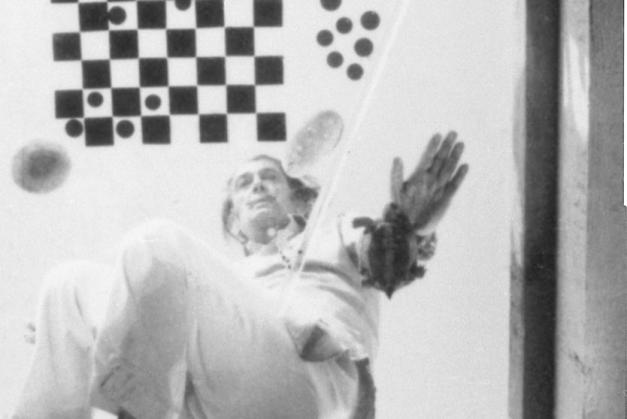 It may seem strange but it is a chess game with three players: Marcel Duchamp, Salvador Dali and Man Ray. The three joined them for their interest in this board game, although only Duchamp lived it as a real passion, and fascinated them as a sham movements of life and death. This relationship and aesthetic confluences between them nourish the exhibition Dalí, Duchamp, Man Ray. D’escacs a game until October 17 can be seen in the municipal museum of Cadaqués, curated by Pilar Parcerisas.

The game trialogue started in 1933, when Duchamp first visited Dali in Cadaques. That summer commissioned Man Ray made a foto of various Gaudi buildings in Barcelona to illustrate an article Dali. At the end of the year the magazine Minotaure published “From térrifiante edible beauté et de l’architecture ‘modern style’ ‘where the artist opens his theory of edible beauty. Man Ray also made several pictures of Dalí in Portlligat covered with a sheet showing that interventionism and always he displayed the painter when it came to his own image.

Cadaqués will be the scene of the relationship between these artists in 1958. And from this date until 1968, Duchamp will spend his summer holidays in this corner of Cap de Creus, along with his companion Teeny, and they will come also Man Ray and his wife Juliet Browner. Both artists we see in photographs of Surrealist bullfight held in Figueres in 1961 in homage to Dalí. It was the day he announced the creation of his Theatre-Museum, which would place a Boîte en valise, Duchamp, a suitcase with a kind of pulldown catalog with reproductions of his works, including the Mona Lisa with a mustache and registration l.h.o.o.q. (Phonetically equivalent to “elle a chaud au cul”). Irony and sense of humor were also shared characteristics.

Duchamp and Man Ray made tours reflect the Empordà and the photos taken by the waterfall of them Escaules, near Figueres, in a lunchroom that surely Dalí recommended them. This cascade leads to the work Étant donnes (now in the Philadelphia Museum), considered the last great creation of Duchamp. Anyway, the exhibition three more pieces made in the summer of 1968 show, shortly before his death. On the one hand, drawing the face of Emili Puignau, mayor of Cadaqués, builder and manager of Dalí, and on the other a dedication to Dr. Vergara on a poster reproduction of N or descendant un escalier (Duchamp’s work that inspired a sculpture Dali). More interesting is the design that made for a anaglyph fireplace, which he built in the apartment he had rented in Cadaques. According Parcerisas with this fireplace “tries to reflect the concerns Stereoscopic years of its optical experiments.” This was another point of contact between Duchamp and Dali. The exhibition also shows the concern daliniana scientific inventions, double images and holograms work on new forms of representation of the image.

In 1918, during World War I, Duchamp went to Buenos Aires and decided to devote himself to chess. “The painting ever interested me less,” he said then. And when half a century later came to Cadaqués not only he played chess in cafes but people participating in local championships in other populations. Once Pierre Cabanne asked: “Is your life in Cadaqués is different than it has in Paris or New York?”. And he said, “Stay in the shade. It is wonderful. Everyone, on the contrary, sunbathing tanning is one thing that horrifies me. ” The game of chess fascinated the Cubists and is represented in works by Gris, Delaunay, Marcoussis or Mondrian. But the great popularizer was Duchamp, saying identify with the figure of the horse, probably because of their movement. Man Ray has pictures of boards and in the 20’s and 40 came to market several models. Dalí also made one commissioned by Duchamp. The chips were different representations of the fingers, but took a salt shaker towers of a hotel as a model.

For Duchamp, chess was a metaphor for his life. He once said: “Contemplating the formation of the chess pieces on the board carries an implicit mind purpose, in chess there is always a transformation of the visual aspect in gray matter, and art should spend the same.” The exhibition of Cadaques is in this sense an invitation to understand art as a poetic machine that can transform everything.