Velázquez talks with his contemporaries of the Golden Age at CaixaForum 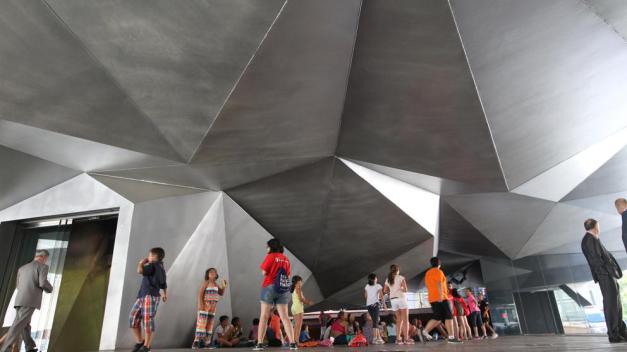 The CaixaForum opens the first great exhibition on Velázquez on Friday, which can be seen in Barcelona. The baroque collection of the Museo del Prado in Madrid nourishes the exhibition, which proposes a dialogue between seven masterpieces by the Sevillan painter and fifty canvases by other great artists of his time, among which Rubens, Ribera, El Greco, Zurbarán, Giordano or Van Dyck. The works of Velázquez offer a broad vision of the stylistic and thematic palette of the painter and propose a game of comparisons and correlations with some of the Spanish and international painters with whom they were related or whose production was up to date. The exhibition, which coexists with the CaixaForum with another large exhibition dedicated to Toulouse Lautrec, can be visited until March 3, 2019.

Titià, El Greco, Ribera, Antonio Moro, Rubens, Murillo, Giordano, Brueghel, Guido Reni, Van Dyck, Zurbarán, Claudio de Lorena and Stanzione are the constellation of artists whose work accompanies seven great paintings by Velázquez (Seville, 1599 – Madrid, 1660) at the exhibition ‘Velázquez and the Golden Age’ at CaixaForum. The seven masterpieces of the Sevillan painter are ‘Felipe IV’, ‘Juan Martínez Montañés’,’ Isop ‘,’ Adoration of the Three Kings’, ‘Bufó con libros’,’ Prince Baltasar Carlos on horseback ‘and’ Mart’.Les Pieces chosen by commissioner Javier Portús Pérez (head of preservation of Spanish painting of the Prado Museum) seek to give “a description as wide as possible of the author,” according to ACN. “The intention is that with these seven works we understand who was Velázquez, the eagerness of originality, the narrative singularity and the extraordinary technical virtues that make it one of the peaks of painting,” says the curator. “He was one of the most versatile Spanish artists and he cultivated a variety of topics, which he wanted to reflect on the exhibition.” The representation of knowledge, religion, reflection on art, the Court, mythology and landscape are the thematic areas proposed by the exhibition to show this thematic fan of Velázquez. For each subject, a canvas by Velázquez. And around it, works by other Spanish and international artists that allow us to compare their work with what other Spanish and European painters of the Golden Age have done, as well as the European, “which place Velázquez to the visitor in another place accurate “, says Portús. “From a very young age, Velázquez sought singularity with a desire to distinguish himself, from his first works in Seville: still lifes that do not resemble anything known until then.” Later on, he would go to work at the service of the Royal Court, “a competitive medium and where to become singular”, and from where he had access to production that was made at European level. The courts of the various European states did this function of artistic promotion and contributed to the observation, comparison and influence between the various creators of the moment. In this sense, the exhibition’s curator admits that while we are accustomed to writing the history of painting in terms of national schools (the “Golden Age” Spanish), “reality was not always so compartmentalized, because painting is a language that knows no borders “. “The game of stimuli and influences was extraordinarily varied, and one of the things that this exhibition shows is to what extent at that time painting was an international language that knew no borders,” Portús concludes. ‘Velázquez y el Siglo de Oro’ is the third exhibition organized jointly between CaixaForum and the Prado Museum, after ‘Goya. Lights and Shadows ‘, and’ The captivating beauty. Treasures of the Prado Museum ‘. In this case, the new exhibition in Barcelona adds to the acts of celebration of the bicentennial of the Madrid art gallery.