Jaume Plensa will install a sculpture in the atrium of Montserrat 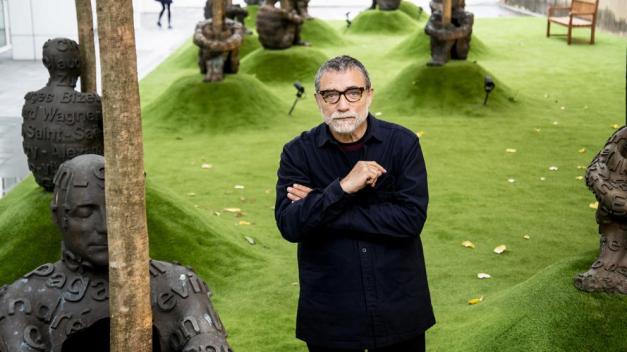 Jaume Plensa will install a sculpture in the atrium of Montserrat

The sculptor Jaume Plensa will install next May a sculpture in the atrium of the basilica of Santa Maria de Montserrat and, at the same time, will inaugurate an exhibition in the Pere Pruna art space of the Montserrat Museum.

The director of the center, Father Josep de C. Laplana, explained to Efe that the sculpture, which represents the face of the daughter of a friend of his, will be placed when the pavement of the atrium is finished and will remain in that place six months. Subsequently, it will be decided if the work remains or changes its location.

The installation of this piece on the outside of the basilica will culminate the restoration of the atrium, where in recent months sculptured, sgraffito materials have been cleaned and the marble pavement has been repaired. Father Laplana has indicated: “Whether or not the work remains depends, first, on Jaume Plensa, and then on the community. It is a decision that should not be taken hastily. ”

The relationship between the Benedictine community and the sculptor arose as a result of the organization of some conferences, to which, finally, the artist could not attend because he was traveling, and then “there was talk that he could plant one of his sculptures for six months in Montserrat “. Regarding the exhibition, which can be visited until November, he said that he will have a selection of drawings and graphic work.

Born in Barcelona in 1955, Jaume Plensa is today one of the creators of monumental works more recognized in the world, although “before anything” is considered a sculptor. His references include literature, poetry, music or thought and his works have to do with the “physical and spiritual essence, conscience, moral codes or the relationship of being with nature.”

He exhibits regularly in galleries and museums in Europe, the United States and Asia, and a significant part of his work is exhibited in public spaces, with pieces permanently installed in cities in Spain, France, Japan, England, Korea, Germany, Canada, United States United or China.