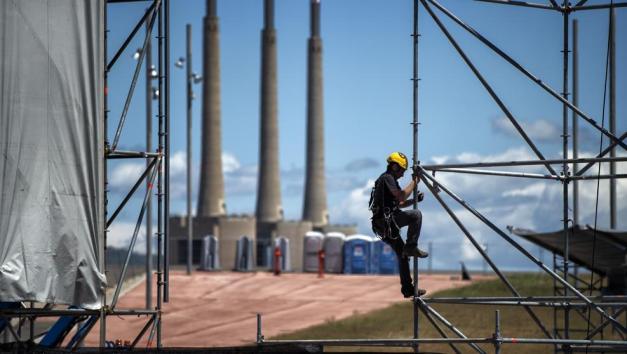 For the amateur connoisseur of Primavera Sound festival, it is today when the big one of the most important appointments of Europe indie music week begins. It is also true that for a very high proportion of those attending the festival, the conference taking place in the immense Parc del Forum are the festival, since that is where the bulk of the cartel and the vast majority of concentrates best known names. All this does not mean that, in addition to further elapses from the afternoon of Wednesday until Saturday, Primavera welcomes throughout this week suggestive of concerts taking place in various locations in the city.

This interest decongest the human and musical hotbed that come together at the site of the Forum of Cultures has been a constant since the organization decided some years ago to move to that, moreover, enviable location. On the one hand, there is the offer of Primavera als Clubs, which this year focuses on three rooms, both Apollo and Barts, ie the knot Nou de la Rambla and Paral·lel. Concerts in these rooms are technically officially inaugurate the 16th edition of the festival on today, will continue tomorrow and Sunday and will end with the traditional closing day. To access all concerts is essential to the payment of Primavera Sound 2016.

True to the philosophy and spirit of the musical event, in these rooms names cites both emerging and consolidated, covering a wide range of preferences will be given. Proposals known as the for many mythical Psychic TV / pTVR, the garage rock and sharply underground Ty Segall and The Muggers (that Sunday will be in Apollo and one day before the Spring scenario Parc del Forum) or the highly recommended Australian band the Avalanches, which also will double session on Friday morning in the Ray-Ban and Sunday on the big stage Apollo. More things: the electronic pop of now people like Empress experimental varying degrees Suuns or Deradoorian Of, Jessy Lanza and SG Lewis, or “guitarrera” proposed for White Fence (ie, Tim Presley, former teammate of Mark E. Smith The Fall). And, hardly known in these latitudes, should not overlook the presence and activities of the Polish musician Kuba Ziolek, to be presented at his solo project Stara Rzeka, which promises to leave no one indifferent with a striking staging base electronics, electric guitar, vocals and mix of folk and metal, among other ingredients.

Local and national supply is also level, starting with the return to direct the unforgettable Mar Otra Vez, integrated among others by Corcobado and come to commemorate the thirtieth anniversary of the launch have not forgotten how to play in the mud band / Feast of the devil and pork, the album that debuted and positioned them as references other Madrid scene. More affordable is undoubtedly the dreamy pop and synthetic bill signed by Carla, who is none other than Carla Serrat (sister of the well established Joana Serrat) compared to their debut album -shaped single a couple of seasons- ago with FKA Twigs or Beach House, and defend the many virtues of his new release, the album Night thoughts, which puts it as very name to be considered in the Spanish electronic pop scene.

Nor they go unnoticed the more muscular proposal Univers and noise decibel rock pop or rock also Valencians Siberian Wolves. And for calmer spirits, nothing like the offer of Barcelona Wind Atlas, between beautiful and disturbing. A presence that is within an attractive showcase organized by the local label Boston Pizza on Sunday in La 2 of Apollo, which will complete the group’s performances +++ (which can pronounce Tres Cruces or CruzCruzCruz and that is quite unusual proposal Marc O’Callaghan composed and Victor Dvnke) Barcelona duo, presenting his new album Octagrammaton, overflowing with dark neofolk and punk spiritual tone, and also Barcelona Cadena, with a more perceptible script based punk and hardcore with little contemplations for fearful spirits.

Outside of this chapter and Primavera als Clubs, a couple of reminders. They are totally free concerts of traditional Wednesday afternoon at the Forum, which will this time see, in order of appearance, double Pletina, The Last Neighbor, Mr. Chinarro, Goat and Suede. The other big concerts chapter are those who take cover behind the call to Spring Raval.

It will also be free from any toll the new proposal Primavera al Raval, which has a powerful offering of over seventy artists and musical groups performing on three stages arranged in and around the CCCB from Friday to Sunday. Among which, Mudhoney, without which no group grunge understand the nineties; Barcelona return to Robert Foster, the former leader of the often glorious The Go-Betweens; the solo show of Bradford Cox (who will also double and will also be in action Saturday Deerhunter at the Parc del Forum) or incontinence of Black Lips. To all proposals more sedate and solid as those of Cass McCombs or essential dreamers A.R. Kane.

For many it is the voice of the moment, perhaps the century, and the sales numbers give reason to all those who support this thesis. The last time Adele visited Barcelona for a concert was in April 2001 in a performance that did not take place in one of the enclosures with more capacity of the city, but in the Bikini disco. And that the interpreter Tottenham had their second album, 21, the album that gave known throughout the world. The artist now returns to Spain in two unique concerts at the Palau Sant Jordi with his tour called 25, which began last February in Belfast. Her spectacular voice is the main weapon to seduce the world public, so we’re talking about an artist who often flee artificiality and large ornaments in their concerts. The excitement of the show is in the defense of a melancholic songs that are known worldwide and hiding pieces of life of an artist who recognizes that his new album through his songs, the person is seen in which it has become inadvertently. The diva arrived in Barcelona after winning four awards at the Billboard awards, including best artist of the year.

The long-awaited third album Adele, 25, follows the romantic wake of the above with many issues about love and heartbreak, but that sway in the passage from adolescence to maturity that Britain wants to defend now above scenarios . There wanting to listen live to the artist Tottenham evidenced by the fact that tickets for both concerts in Barcelona sold out within hours. Hurricane Adele, is not only visible on her vocal strength, but also in the expectation generated by their music in pop disputing the throne young artists with millions of followers as the Canadian Justin Bieber or the band One Direction. Attention to this fact: his new album 25 only took one week to become the biggest selling album of 2015. 7 days. Tickets for the second concert-promoter seems the Doctor Music was clear that with a recital would not be enough were sold out in less than an hour. Stratospheric some evidence that the return of the British, after four years of silence, have become endless for more than one.

After his first European leg concerts, among which six concerts at the O2 Arena in London, the British arrived in Barcelona with a repertoire that will probably not exceed 20 songs. Judging by what we have seen in other productions of the tour, and waiting for a surprise or nod towards Barcelona, the Tottenham defend issues of his three albums, with special attention to the lyrics 25. You can bet that Hello (song that already exceeds half billion views on YouTube) will be the subject responsible for opening a performance that will not forget other songs from his new job as Water Under The Bridge, I Miss You, Million Years Aug, Sweetest Devotion, All I Ask or When We Were Young, an issue that usually leave for the end of the recital. No shortage songs from his 21 as Someone Like You, one of his greatest hits, One And Only, Set Fire To The Rain, Rumor Has It, or danceable Rolling in the Deep with which usually close the show. From his first album, sound pieces like Chasing Pavements, Make You Feel My Love (classic version of Bob Dylan) or Hometown Glor and the single that was released in 2007. He also lack Skyfall, the issue that made for Operation Skyfall film of the saga of James Bond.

The two consecutive concerts of Adele (24 and 25 May) will complete a great week in Barcelona for British and world pop with the presence of the band Coldplay at Estadi Olimpic (26 and 27 May) to present the tour of his new disk A Head Full of Dreams, also all sold out. Looking recital British diva has announced that TMB enabled for the two-day concert special bus service down between Palau and Plaça Espanya. Bus line 150 is also reinforced with more vehicles from six in the evening until concert time so that users can upload to the site.

The singer will perform at the Auditorium of the Forum at the International Jazz cycle of Barcelona that gathers names like Chucho Valdes, Chick Corea or Noa

This weekend starts the 47th edition of the Voll-Damm International Jazz Festival of Barcelona, ​​dozens of concerts scheduled until next December. It will be on September 26 at the Auditorium of the Forum with Diana Krall and sensuality of a voice falling almost three decades leading the public and critics. Wallflower World Tour, the name given its upcoming world tour, will come loaded with pop classics like California Dreamin’ The Mamas and the Papas, Desperado Eagles or Bob Dylan Wallflower, among many others. His admiration for Elton John was also recorded in this new job and on tour, where not lack Sorry Seems To Be The Hardest Word, an issue that is part of Diana’s life since he was a teenager, heard first album Blue Moves.

Last year with great success presented two types of “abonos” (with out sales), which was allowed to go to a good number of concerts with localities notch and very competitive prices, often below 15 euros entry. In this edition will be presented five types: one for all the interesting programming Liceo Conservatory, “Recorregut” called Children Of The Light (8 concerts); and two tours under the name of Chick Corea (3 concerts) and Chucho Valdes (11 concerts); a free subscription, “Recorregut “called Free Jazz, in which everyone can choose five or more concerts they desire it, and a comprehensive “Abono Recorregut” All That Jazz, which is the full amount of the three paths artist (22 concerts) .