Skiing, snowboarding, clothing … All the new equipment and ski resorts for the new season will be in Let’s Snow BCN 2016, the great ski and mountain festival that hosts from 11 to 13 November the Poble Espanyol 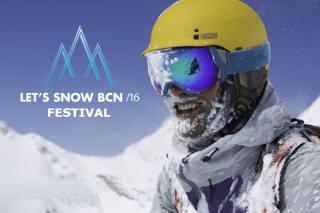 After several years of emptiness in this sector, and with the aim of becoming a reference event of the ski and the mountain in the country, Let’s Snow BCN will be a great meeting point for lovers of snow and high mountain but also For the general family audience.

The 42,000 square meters of the Poble Espanyol – an emblematic site located in the heart of Montjuïc and very well connected with the center of Barcelona – give for much. In the large exhibition space you can get discounted ski passes, purchase tourist products and know the latest developments in the world of skiing and snow.
Let’s Snow has the participation of stations such as La Molina, Masella, Vallter 2000, Port Ainé, Espot, Vall de Núria, Boí Taüll, Aramón (mountains of Aragon) and Baqueira Beret, besides Tourism of Switzerland, Tourism of Austria, Tourism La Cerdanya, Les Neiges Catalanes and prestigious brands such as Völk, Head or Fischer, among others.
Three days of activities for all audiences

In addition to the great world of skiing and snowboarding, which will be distributed in different spaces of the site and will include equipment, travel agency stands and specialized stores, attendees of Let’s Snow BCN will be able to enjoy many other proposals: there will be a skating rink Of 120 m2, a gastronomic market with typical mountain products, a chill area with DJ’s (après-ski by Marchica included), an occasional market and outlet, screening of a selection of short films from Skimetraje (short film and ski festival) Snowshoeing in the Pyrenees) … And there will be no lack of participatory activities such as segway, alpine slalom online or roller ski, as well as workshops to learn how to properly maintain ski equipment, cooking workshops and showcookings.

Also note that the climber Ferran Latorre will present CAT14x800, a personal project with which he aims to become the first Catalan to reach the 14 highest tops of the planet, without oxygen. The well-known rider Aymar Navarro, for his part, will present the documentary South Lines.
The little ones will enjoy to the maximum in the adventure zone, where there will be a climbing wall, tirolina, an agility park and slackline. And the main course: the mushing! The children will meet Siberian Husky dogs and will be introduced to the sport of sleds pulled by these animals. They can interact with them, take pictures and even walk on a mountain skate pulled by these dogs, learning to give them the basic orders. The same sensations that are experienced when practicing this sport on the snow … but in this case on land and without leaving the city!
The Vaca Voltaire, a workshop where children will learn how to order cows as they used to, will complete the offer for children; And orienteering races, in which participants must complete a fun time trial route.
All activities are included with the entrance to the festival (except Tapas route). Prices: adults € 6 at the box office and € 5 purchase online. Children € 5 at the box office and € 4 purchase online
A festival with a prize!

One of the many spaces of Let’s Snow BCN 2016 will be presided over by a photocall in which the attendees will be able to make fun photos … but not only that! Hanging up the picture on Instagram with #SAMIZEDSUIZA and #LETSSNOWBCN, will enter the draw for a ski weekend in Switzerland (three hotel nights in Interlaken with a two-day pass and entrance to the Ice Magic ice skating rink for two people).
How to get:
Avinguda de Francesc Ferrer i Guàrdia, 13
08038 Barcelona

More information and advance sale of tickets at   poble español and www.letssnowbcn.com

Slow food in the Eixample of BCN

Slow food in the Eixample of BCN

The Merchant of L’Eixample has begun strongly his career in the corner of the passage Mercader with Mallorca street. This house converted into a gastronomic restaurant welcomes ( “cuisine of Barcelona ‘claim) with the philosophy’ slow food ‘, the same applies in El Filete Ruso (one of his own boss in the new facility).

The Merchant of L’Eixample, whose bid avoids fancy stuff in the kitchen to highlight the quality of ingredients, have their own garden and ecological product works (try it Kilometer Zero). There are tapas to take at any time of day, plates (attention to the compelling simplicity of squid jigging) and suggestions of the month. Average price, 30 euros.

Tech City signs contract to occupy the office building, which would come into operation in April

The BCN Tech City finally signed this Tuesday morning the rental contract offices at Palau de Mar to turn on the “home of entrepreneurs” of Barcelona. The building, with 10,000 m2, is owned by the Port and manages the company Portico de Mar.

“It will be one of the venues of the world’s largest enterprise,” said Miguel Vicente, president of Tech City cluster, which groups 240 members representing more than 300 companies in the digital world, plus 24 transverse partners, from financial to real estate.

The Tech City, which directs Miquel Martí, has negotiated for months to get this iconic location, it becomes an international benchmark in Barcelona’s ecosystem. The Palau de Mar will host connector, Antai-BeRepublic, 101 Startups, m-VenturesBCN, or Genapp Glover. It is expected to become operational in April.

Evolution of the universe

Exhibition ‘Accelerating Science’ at the CosmoCaixa in BCN

CosmoCaixa Barcelona presents the exhibition entitled ‘Accelerant science “, where a visual spectacle in which the evolution of the universe from the Big Bang to the present explains offered. A sample produced by the Conseil Européen pour la Recherche Nucléaire (CERN) with the aim of spreading its research while seeking to raise public awareness of its usefulness.

The viewer will know, from different interactive methods, such as the CERN carried out investigations of the fundamental particles that make up the universe, inviting him to wonder what exactly are these particles and what the various families that compose them are. 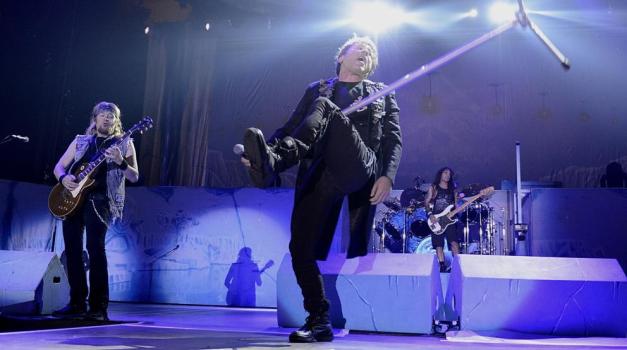 Iron Maiden have announced three dates in Spain in their 2016 world tour, presenting his latest album, The Book of Souls. The English band will perform at festivals Resurrection Fest and Rock Fest BCN, and will at the same date BarclayCard Center of Madrid, all in July.

The first stop of the tour will be in the Resurrection Fest Viveiro (Lugo, July 9), then it will turn to Madrid (July 13, BarclayCard Center), before participating in the Rock Fest BCN (July 16 in Santa Coloma).

In a statement on the website of the festival, singer Bruce Dickinson commented. “We are delighted to return to Barcelona, ​​and act on Rock Fest Barcelona have not decided the set list that we offer at the concert, but we’d play some new songs from our latest album “. “As long as we do not see, I can assure you that we will include our great classics. I think the show delighted with the thought that we shall be left fans,” he added.

Madrid Tickets go on sale on 16 December (pre-sale will be the band’s website from 14); for other appointments, fertilizers are already on sale.

Juan Diego Flórez at the Liceu in BCN

The Peruvian tenor Juan Diego Florez debut on December 4 in the role of Edgardo in Lucia di Lammermoor, reaching the Liceu with a staging of Damiano Michieletto dominated by a leaning tower of nine meters high, which go up interpreters repeatedly.

Florez shown today very proud to debut in a role that “have interpreted all the great” and recalled that the first thing he saw was the Edgardo Alfredo Kraus in New York, and was “very impressed”.

“I was very young he remember- -HA. Just leave my country and had no money for the cheapest ticket. I was lucky that the security worker was waiting at the door gave me an entry that was left over. I will never forget.”

It has been many years since that time and Flórez has not decided to tackle this role up to now: “It is true that throughout my career I have played harder than this role, but Edgardo requires a specific vocalism for which I now feel prepared, “he said.

The singers represent their roles in a market dominated by a leaning tower suggesting “the distortion of a world that is falling” scenario, he has clarified the artistic director of the Gran Teatre del Liceu, Christina Scheppelmann.

The soprano Elena Moşuc added that this tower of glass cutting and cold also represents distortion Lucia character she plays a woman who goes mad after facing a hostile environment, which forces her to marry to preserve the power of his family.

The tower is where Lucia shows the situation of women will be isolated and the prison will only death.

During the mad scene, certainly one of the most famous operatic repertoire, soprano is forced to run and climb stairs by a crooked tower, which is especially difficult in the bel canto, a vocal style that needs “of a perfect vocal and breathing techniques, “as pointed Mosuc.

Fortunately for the interpreter, as she has explained, the director has given freedom to move at their own pace in this scene because otherwise reach the end “without breath.”

The soprano who will alternate in the role with Elena , Maria Jose Moreno, ratified the difficulty of the mad scene, but said that “worth” because it “quite shocking”.

The two tenors who play Edgardo Juan Diego Florez and Ismael Jordi, clarified climbing the tower less than her co-stars, which allows them to be “comfortable” and “favoring the bel canto” said Florez.

The work is “a lot of frills and phrases with very colorful requiring filigree work,” stressed Mosuc, and the musical director, Marco Armiliato, is clear that “we must show the singers” and “the orchestra has to support without cover”.

Juan Diego Florez has acknowledged he has had little time to prepare the role and the tests “still had things” we did not know, but trust your “good memory” because, until now, never failed.

Lucia di Lammermoor by Donizetti, is one of the most popular works of bel canto and the debut of Juan Diego Florez “is very attractive to the public,” said Christina Scheppelmann, who has been very satisfied with the pace of ticket sales .

“We already have 75% of capacity sold on average and in some functions arrived at 90%,” he pointed Scheppelman.

The overall figures are also “very good” and that since the start of the season the occupancy rate was 98% on average, depending on the direction of Barcelona opera arena.

This weekend we celebrate the second edition of the Ethical Fashion Fest BCN, sustainable fashion festival in Barcelona

The second edition of the Ethical Fashion Fest BCN (BEFF), the sustainable fashion festival in Barcelona, ​​the Catalan capital has become a benchmark for the slow fashion southern Europe, takes place this weekend. Organized by the Association for Sustainable Fashion Barcelona, ​​the event brings together more than 45 fashion brands ethics historic building of the University of Barcelona in 2 days that seeks to encourage another way of fashion.

This year the festival, which encourages and promotes another way to produce and consume fashion is the guest country Argentina. Have also been prepared parades, lectures and screening of audiovisuals. The schedule is Saturday 11.00 to 21.00 and on Sunday from 10.00 to 14.00.

The gateway stores and ephemeral find independent designers, local fashion brands for adults and children, and sustainable fashion boutiques of the capital, both associated and non-associated Sustainable Fashion Barcelona. The talks focus on the environment, the social impact of textile production and healthy lifestyle, among other topics.