The iconic canvas fascinated both the author and the American writer; the first is regarded as his masterpiece, the second bent over backwards to buy

It is one of the most celebrated works of Joan Miró and considered one of the most important in his career. An iconic painting that fascinated both its author and Ernest Hemingway; the first is considered his masterpiece and the second bent over backwards to buy. He succeeded, but not without first gamble dice and beg all your friends. A feat almost as daunting as the one occupied Miró in its realization: nine months of intense work that began in Mont-Roig, his personal paradise and ended in Paris in 1922. ‘The Farm’. The oil in which Miró wanted to demonstrate their connection with Catalonia: “From a large tree on a small snail, I wanted to put everything I wanted,” he said in 1928. And the oil that paradoxically represented Spain for Hemingway: “Contains everything you feel about Spain when you are there and all you feel when you are away and you can not go, “wrote the US in 1934, the same year that said:” no change ‘La Masía’ by any other picture of the world ” . And the same year that he recovered after having lost in 1926.

In consequence, the voyages of the canvas and the relationship that held two such disparate personalities as Hemingway and Miró writes, after five years of research, Professor Alex Fernandez de Castro in the book ‘La Masía. One looked to Mrs. Hemingway ‘(Publicacions of the University of Valencia). “Rarely has there been a more friendship between different artists,” says the author. “Hemingway was tall and strong, outgoing, careless way of dressing, swashbuckling, charismatic, tireless traveler, compulsive drinker. Miró was shy and short, neat in form, sedentary dump inland, very moderate and occasional drinker” but “there was a mutual respect and admiration, and cordiality”.

They agreed in Paris in the 20s and kept epistolary relationship to the tragic death of the US, although they are rarely reunited. And both, in addition to his love for ‘The Farm’, their shared passion for boxing. Agreed Cercle Americain and more than once Miró made ‘sparring’ Hemingway.. “Sometimes we saw face to face in the ring Face is a manner of speaking he was a giant, a colossus, and I very quietly. it was pretty funny, “noted painter in 1978. it is not clear who carried the author of ‘the old Man and the sea to study Miró’, but what is certain is that when in 1925 the picture was exhibited in Paris, Hemingway had already seen, and when he learned that his colleague Evan Shipman had it booked paled with envy.

About what happened to the oil end up in the hands of Hemingway there are two versions: the novelist that it diced and won; and the poet who said it was a coin toss that decided the fate of the painting. Either way, the fact is that the fabric is led Nobel Literature and it required the help of their colleagues lost generation. Dos Passos and Shipman accompanied him to beg loans from bar to bar in a strange night that the artistic delirium could only ethyl delirium. Some also said that Hemingway got some of the money for the purchase of ‘The Farm’ making ‘sparring’ professional and waiter at Les Halles.

“The wind blew up the canvas like a candle, and made the cabbie lead slowly. At home we hung and everyone looked and felt very happy.” So Hemingway narrated the arrival of the precious piece to your home. Although happiness by the oil lasted the same as that of his marriage to Hadley Richardson. In 1926 they separated and ‘La Masia’ was left to her. That is, until the writer asked in 1934 that lent it a while. It was an indefinite loan because he never returned. Since 1986 he looks at the National Gallery in Washington. And it is because Miró disregarded the advice of the almighty Léonce Rosenberg: this suggested cut into nine pieces because it was too large to sell. The rest of the book.

The side wall of the civic center in the neighborhood of Sant Marti in Barcelona, serves as canvas for the last giant face of urban artist Jorge Rodríguez-Gerada 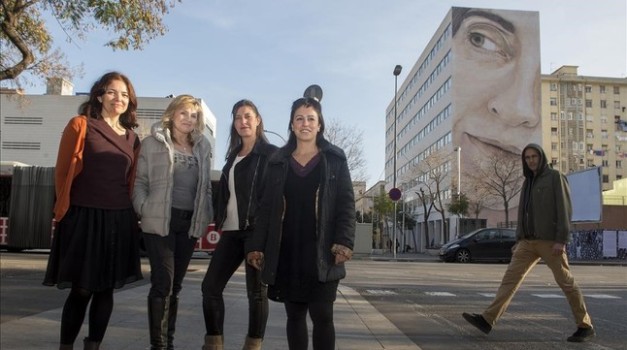 The last Rodríguez-Gerada is the giant face of a woman, or the face of a giant woman reflected in a side wall of Sant Martí Civic Centre: 280 square meters of urban art with the inherent power not go unnoticed. By size, but not alone as almost all the works of the Identity series, which launched in Barcelona installed around -three decades has, more or less, Panorama is not just giant, mostly it’s content. “Instead of the huge picture of a movie star or a politician with a big smile, I draw someone from the neighborhood, the community. Drawing one of us. ” It has done in other neighborhoods like Raval, Horta and Born, and other cities such as Buenos Aires, Monterrey and Paris, and although one of the faces that draws Rodríguez-Gerada has ingredients of privilege, the choice of characters less driven the search for someone brainy representative -what think a newcomer to the world Rodríguez-Gerada- and quota criteria and magnificent as smell or chance. It could be you. It could be your son. It could be your neighbor.

“Instead of the huge picture of a movie star or a politician with a big smile, I draw someone from the neighborhood, the community, drawing one of us,” explains the artist
“It’s an artistic lottery. I get to see people go down the street and pick a person that I like.

I wonder if they identify with the place, if you have a sense of belonging … “Rodríguez-Gerada try not to repeat age or sex, and those are the only criteria beyond the pleasure of simply going out in search of the next face. Thus exposed his methods, who is the woman who squints from the wall of the civic center? Where do you live and what you do? It could be the neighborhood baker, the butcher, could be a teacher. It would, in fact, if Panorama was not an anomaly within the series. But Panorama, for once, is not just one person. Panorama is not a woman.

Jorge Rodríguez-Gerada born in Cuba 49 years ago but raised in the US, where he emigrated with his family in the 70s in the world of street art becomes a kind of old fox, a veteran with stories in tow as two or three times that stopped him in his day the police of New York, at the time I was going down the street to denounce altering billboards manipulative power of advertising. “With find some surprises included as police chief who understand the background of what I was doing and let me go; but they were the exception. ” In Barcelona he gained notoriety with the immense Obama drew on the grounds of the Forum in November 2008, on the eve of elections that upheld the first black US president, even in the environment of local urban artists was already a recognized character.

The works in the series are not giants identities because. “The great thing only works if you have an intrinsic power behind”, explains Rodríguez-Gerada. In addition to size, are among others the common denominator of being drawn in charcoal, which gives them an ephemeral component, dramatic in a way, part of the speech of the artist. “I like the poetry that is in the fact that they are gradually swept away by wind and rain.” But Panorama is different. Panorama, which ended in December and a neighbor not heard yet discovered in wonder these days is made with paint and will last much longer than their peers series, and yes it is not one, there are several women: two work at the Civic Center (Naomi Poncela, mouth, and Chus Ruiz, chin), the third is a user (Montse Noto, eye) and the fourth is used bingo (Luisa Hernandez, nose). In short, a puzzle neighbors. “It’s not just a portrait. It’s a job I like people stopped to look and to think about the effort behind. What it means, too. Unfortunately, it touches urban art people are accustomed to instant, fast, the Banksy. I want to make an impact, but also want the work hold a calm look. So this time I used paint. ”

The character is the work; they are the protagonists. So in the photo the artist is behind, in the background, half hidden under his hood.

Sold a work of the Catalan painter born in Barcelona, Joan Miró for 20.5 million euros at an auction in London

The work “Painting (women, moon, birds),” a 1950 oil painter was sold at Christie’s auction house in a surreal art.

The work “Painting (women, moon, birds),” a 1950 painting of the Catalan painter Joan Miró, was sold today at Christie’s in London at an auction of surreal for 15.5 million pounds (20.5 million euros, or $ 23.3 million), well above the estimated price.

The fabric, 1953, employs some of the most recurring elements of catalan painter in the 1950s, such as birds, trees, sun and moon.

The auction on Wednesday was described by the expert from the London house in modern art, Olivier Camu, as “the best group of works by Miró to hit the market in a single sale”.

Of the six works of the Catalan painter on sale today only “L’échelle de l’évasion” did not reach the estimated price of between 3 and 5 million pounds (4 and 6.6 million euros or 4.4 and $ 7.4 million).