One of the most characteristic buildings of Eixample opens its doors to the public this Friday after over a hundred years without it. The Casa de les Punxes or Terradas house is an emblematic modernist urban palace built in 1905, designed by the architect Josep Puig i Cadafalch and located on Diagonal Avenue with Rossello.

Early last century, its owner Bartomeu Terradas prestigious Barcelona architect commissioned to design a house for each of his three sisters. The result was a single building with three different entrances, with elements of several architectural currents and six towers, aspects reminiscent of old medieval castles.

A century later, first opened its doors to locals and does so with a tune interesting point. The public can get into the bowels of the building and enjoy an immersive audiovisual which tells the legend of Sant Jordi, its undeniable connection with modernism and as a recurring icon in the Casa de les Punxes. And of course, visitors can enjoy the little details that keeps every corner of the property. Without forgetting the terrace, where besides enjoy the panoramic views surrounded by the towers so characteristic, you can visit a space dedicated to discover the author and all historical and architectural details of the house.

In recent months we have worked hard to adapt the building to the accessibility of visitors, “acting on the ground floor, the main deck, which are the areas that have been conditioned to the visit, adapting them to the museum activity” explains Jaume Falguera, responsible for the rehabilitation of this jewel of modernism listed as National Interest architect.

The family owns the real estate group, Texna, bought the entire estate in 2010, in which there are four houses, several offices, a bank and other businesses. But so far could not visit the interior, it has always been of interest for its facade and because it is located at an intermediate point between tourist icons of the city as La Pedrera and Sagrada Familia.

A point of celebrating the 150th anniversary of the birth of architect Josep Puig i Calafalch, the Casa de les Punxes opens in order to adapt history and tradition to new forms of cultural consumption. Thus uniting tradition and innovation, as did its creator with architectural advances developed.

It will be open from 9 to 20 hours all year except Christmas Day and will offer two types of visits: audioguide available in ten languages (12.50 euros) and format guided tour in small groups of a maximum of 20 people (20 euros ). In this second embodiment, throughout 2016 there will be a discount for residents in Barcelona who can purchase tickets at a price of 14 euros. They may be purchased at the box office and online.

La Casa Batllo has been pretty on the occasion of the celebration of Sant Jordi. This morning the locals were able to see how the historic building designed by Gaudí looked best galas covered with roses. The beautiful images have been posted on the social network Twitter, which has become the precious aspect of the Casa Batllo Trending Topic.

This is a very special solidarity and visual action: a blanket of roses covering the iconic facade of Passeig de Gràcia with a spectacular installation of more than 1,000 flowers dress balconies and the gallery of this World Heritage.

The assembly can be enjoyed until Sunday afternoon 24 and is part of the campaign # MésQueUnaRosa, culminating at street level with roses 2016 donation to the Foundation Arrels. Moreover, contrary to Casa Batllo solidarity will be available rose to a voluntary price and the funds raised will go entirely to Arrels.

# MésQueUnaRosa is a love story with the city of Barcelona that aims to bring the legend that houses the Casa connecting with the public. And above all, to publicize the problem of people living on the street from empathy and through collaboration. In addition to selling roses, Arrels leverage is the International Book Day to present in front of the Casa Batllo the latest release of Miguel Fuster, 15 anys al carrer.

This Barcelona artist spent more than a decade living in the street and regained his life thanks to the work of the workers and volunteers of the foundation, which now collaborates with drawing awareness and giving talks to students.

It will host a restaurant of Martin Berasategui and some rooms will cost up to 2,500 euros 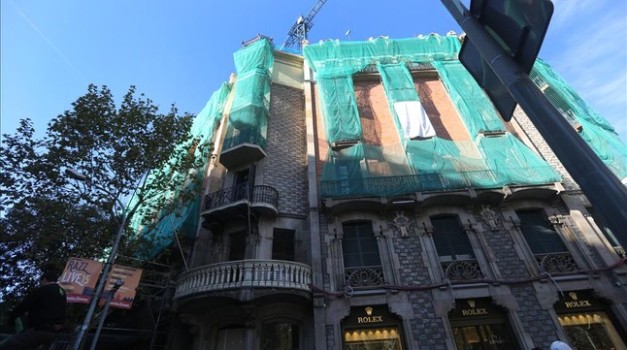 Barcelona will have a new five-star luxury from January. The Hotel Monument revitalize the space until recently occupied one of the two buildings of the Hotel Condes de Barcelona on Passeig de Gràcia, the palace known as Casa Batllo Enric, the closest to the Diagonal Avenue.

Setting part with the aim of becoming “the landmark hotel in Barcelona luxury”, as discussed its general director, Miriam Cortijo, who has emerged as one of its great attractions presence restaurant Oria, the “multiestrellado” chef Martin Berasategui. The chef already has a bistro space at the Hotel Condes de Barcelona four star beachfront Hotel Monument future building.

The new hotel will reduce from 109 to 84 rooms with the aim of extending the useful surface of each -of stay between 24 and 85 square-meters and adapt to the offer of a luxury hotel that will employ about 80 people. Prices for the apartments range between 300 and 2,500 euros. Although it has not disclosed the investment made, the owner of the initial plans provided for a payment of 15 million euros.

The space aims to combine modern aesthetics with the legacy of the pre-modernist building designed by Josep Vilaseca, as have highlighted Tote Moreno and Carles Basso, the architects responsible for the renovation, with the collaboration of Oscar Tusquets.

Moreno highlighted the collaboration of Patrimoni for “respecting and valuing” the rich architectural heritage of building space totaling nearly 600 square meters to its nearly 8,000 total meters of surface thanks to the creation of two basements for services that customers receive.

The interior of the hotel will try to give continuity to the environment luxury spaces in which it is located, as discussed responsible for interior design project, Mercè Borrell, who has tried to reconcile the great style and timeless luxury and responding to command to “open the hotel to the city” through the bar and the other “cocketelería” integrated into the ‘lobby’ of the hotel spaces.

The Hotel Monument is the final stage of rehabilitation of a building built in 1896, with clear traces of neo-gothic inspiration and inicipiente Modernism. It was commissioned by the industrialist Enric Batllo to Vilaseca, author of the Arc de Triomphe in Barcelona and close associate of Lluis Domenech i Montaner.