The fountain of Hercules, in Còrsega street with Passeig Sant Joan, is the oldest public monument in the city, opened in 1802 in the disappeared Passeig of the Esplanade 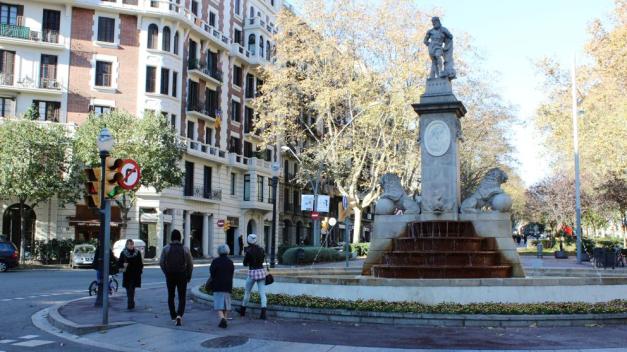 It is the oldest public statue of Barcelona and represents Hercules, mythological founder of the city. Currently he can be seen capping the fountain of crossing the Paseo Sant Joan and Còrsega. But it was not always there. When built, for over two centuries, it was located in the late ride Esplanada, a landscaped public space in Barcelona between the Ribera district and the Ciutadella fortress.

It is the work of Salvador Gurri, a sculptor highly prized in the late eighteenth and early nineteenth century. It is estimated that the monument was built between 1797 and 1802, on the initiative of the then Captain General of Catalonia, Augustine of Lancaster, to commemorate the visit to Barcelona of King Carlos IV and his wife, Maria Luisa of Parma. In fact, the source of Hercules was part of a set of four devoted to mythological characters. The other three were devoted to Fortis sea god, a Nereid riding a dolphin and the nymph Arethusa. The Hercules is the only survivor of that group.

The original location of the four fountains, the walk to the Esplanade, for nearly a century was a very popular and frequented by the locals space, devoid of amenities within the walls. The tour ran more or less parallel to the street Commerce, in full security zone, uninhabited, which had been arranged around the Ciutadella. He starting near what is now the station França and ending in the Portal Nou, almost touching the current Arc de Triomf, largely following the path of Paseo Picasso.

The demolition of the strength and development of the park and the site of the Universal Exhibition of 1888 condemned this first public garden and fountains. Only saved Hercules, being in the near Arc de Triomf end, so he joined gardens also disappeared Palau de les Belles Arts. He was there until 1928, when his transfer was decided to urbanize the ride Sant Joan, designed as an extension of the Esplanada.

Until the Civil War, the dean of the city monument was the source of Santa Eulalia, originally from 1673, which was destroyed during the war and later restored.

Winter season comes, to the Magic Fountains in Barcelona

The Magic Fountain and little fountains at Maria Cristina begin work this week in winter time. From October 30th until  March 27th-2016, the fountain offers the traditional choreography of light, color, music and water, Fridays and Saturdays between 19 pm and 21pm, with choreography start at 19h, 19: 30h, 20h and 20: 30h.

For the autumn – winter 2015-2016 Magic Fountain starts his shows with the legendary “Barcelona” starring Freddy Mercury and Montserrat Caballé, sound and choreography combine the great successes of the 2000s and this decade, remix classical, Spanish classical music, children’s music, selection of soundtracks for movies and traditional closure • show the Song of the flag. Also continue programming additions in recent seasons remix Catalan groups, the piece “City between two blue” Friends of the Arts released on the occasion of the World Swimming Championships and the Tricentenary of Music premiered on September 11 of last year.
Special program for the International Jazz Festival

Until 9th December , can continue to enjoy the jazz program built to mark the 47 Voll-Damm International Jazz Festival of Barcelona, ​​in sessions of 20 hours with approximately 20 minutes devoted to artists such illegal famous as Edith Piaf, Billie Holiday and Frank Sinatra.

This emblematic installation of water the city receives around 2.5 million visitors a year and is an icon of the city recognized worldwide. It has a specific website, available in Catalan, Spanish and English, where you can view information such as the origins and history of the source, the trajectory and evolution since its opening in 1929, updated data on the operation, and schedules current information.

An English philanthropist who funded a network of public drinking water fountains in Paris gave 12 to Barcelona in 1888, of which only two remains.

Unnoticed and the 12 that had Barcelona and only two remain in the streets of the city. This is known as Wallace sources, surname of English philanthropist who distributed them to different cities of Europe and America. For history we must go back to Paris in the late nineteenth century.

The French capital was suffering the consequences of war with Prussia and the Commune. The bombing had caused much destruction. One of the effects was the increase in the price of water, often preventing access to the supply of the masses, which in turn led to problems of hygiene and sanitation. To remedy this situation, an English philanthropist Richard Wallace, heir to a great fortune and living in Paris, decided to finance, among other works, a set of public sources to provide free water throughout the city.

Wallace commissioned the design source sculptor Charles-Auguste Lebourg. There were several models, but the most popular was a set of cast iron of 2.71 meters high which is characterized by four caryatids supporting the dome. Represent goodness, simplicity, charity and sobriety, and the four seasons. They have the right balance between monumentality and sobriety, as well as between utility and aesthetics. The goal was to get a reasonable price per unit that would install them throughout Paris.

Wallace decided to extend to other cities its source to reinforce the idea of brotherhood among men. Barcelona was one of the chosen, thanks to the friendship that Mayor Rius i Taulet strike up with philanthropist. Thus, during the Universal Exhibition of 1888, Wallace sent 12 sources to Barcelona. Today and only surviving original two. One is on the Rambla, opposite the passage through which you access the Museu de Cera. The other is in one corner of the Gran Via and Passeig de Gràcia. There are others, but later copies. San Sebastián, New Orleans, London, Montevideo, Montreal, Zurich and other cities Burscheid are Club Wallace Fountains.