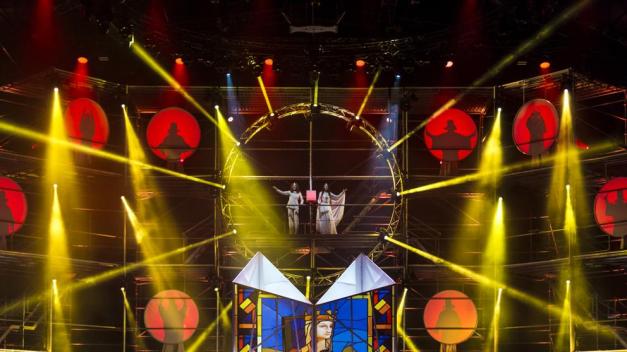 Cirque du Soleil from 2018 will install a tent of 19,000 square meters and can accommodate 2,500 spectators in the neighborhood of Bellvitge in L’Hospitalet de Llobregat, where he will take their shows on tour in Europe, according to an agreement reached with the City.

The mayor of L’Hospitalet, Núria Marín, and Vice President of Touring Show Division in Cirque du Soleil, Finn Taylor, have signed this Thursday at the Palacio de Can Buxeres the agreement of intent by the company is committed to bring the second city of Catalunya its touring shows that take place in a tent between 2018 and 2030.

“Cirque du Soleil has not signed any agreement so long as this, what we normally do is go to a city two or three times, but have never made such a substantial agreement,” said Finn Taylor.

The first of the Cirque du Soleil in L’Hospitalet will take place in March 2018 and, according to Taylor, “there is a show planned to be the first, but not yet confirmed internally, so you can not advance” .

In order to represent this show, the company, with 120 permanent workers, it will be established between the months of February and June temporarily in L’Hospitalet and raise a tent with 2,500 seats on a plot of 19,000 square meters between the crossing and Industrial Feixa Llarga street, in the neighborhood of Bellvitge.

Taylor stressed that “in every city where the Cirque du Soleil is located is hired 250 people for different tasks, such as riding tents or operate the shows, as well as the economic impact on the housing, advertising agencies or restoration.”

For its part, the mayor of L’Hospitalet, Núria Marín, stressed that the arrival of the Cirque du Soleil “is the result of a strategic decision of the city to bet on culture and can make engine so that other activities can reach faster and develop the Cultural District “.

As for the possibility of touring shows of Cirque du Soleil can return to the city of Barcelona, Finn Taylor has ruled, saying that L’Hospitalet has become his “home”.

“Shows our of those made in stages, as we have done about Michael Jackson or Avatar, yes that could be Barcelona, but circuses, which are company logo, will be in L ‘ Hospitalet.

The British chain easyHotel will built in L’Hospitalet de Llobregat its first hotel in Spain, a facility with 200 rooms will open in 2018 and will involve an investment of 15 million euros.

The hotel will be located on the Avenue of the Granvia, it will also be the first chain to have their property outside the UK, but has other facilities or under a franchise operator in different European countries, as reported by the City Council in a statement.

The Mayor, Núria Marín, said that this new hotel “L’Hospitalet reaffirms as one of the leading business tourism and economic dynamism in Catalonia”. The company has chosen to settle around the Plaza de Europa of L’Hospitalet in assessing the proximity to the airport, Fira de Barcelona and the center of Barcelona, as well as connections to public transport and services on the environment.

The hotel easyHotel the 13 hotels that currently has the second largest city of Catalonia and offering a total of 3,600 seats will be added.