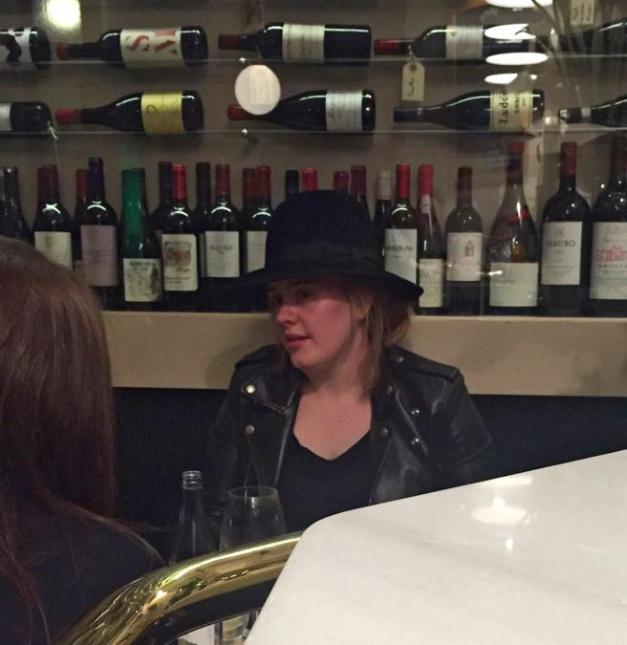 For many it is the voice of the moment, perhaps the century, and the sales numbers give reason to all those who support this thesis. The last time Adele visited Barcelona for a concert was in April 2001 in a performance that did not take place in one of the enclosures with more capacity of the city, but in the Bikini disco. And that the interpreter Tottenham had their second album, 21, the album that gave known throughout the world. The artist now returns to Spain in two unique concerts at the Palau Sant Jordi with his tour called 25, which began last February in Belfast. Her spectacular voice is the main weapon to seduce the world public, so we’re talking about an artist who often flee artificiality and large ornaments in their concerts. The excitement of the show is in the defense of a melancholic songs that are known worldwide and hiding pieces of life of an artist who recognizes that his new album through his songs, the person is seen in which it has become inadvertently. The diva arrived in Barcelona after winning four awards at the Billboard awards, including best artist of the year.

The long-awaited third album Adele, 25, follows the romantic wake of the above with many issues about love and heartbreak, but that sway in the passage from adolescence to maturity that Britain wants to defend now above scenarios . There wanting to listen live to the artist Tottenham evidenced by the fact that tickets for both concerts in Barcelona sold out within hours. Hurricane Adele, is not only visible on her vocal strength, but also in the expectation generated by their music in pop disputing the throne young artists with millions of followers as the Canadian Justin Bieber or the band One Direction. Attention to this fact: his new album 25 only took one week to become the biggest selling album of 2015. 7 days. Tickets for the second concert-promoter seems the Doctor Music was clear that with a recital would not be enough were sold out in less than an hour. Stratospheric some evidence that the return of the British, after four years of silence, have become endless for more than one.

After his first European leg concerts, among which six concerts at the O2 Arena in London, the British arrived in Barcelona with a repertoire that will probably not exceed 20 songs. Judging by what we have seen in other productions of the tour, and waiting for a surprise or nod towards Barcelona, the Tottenham defend issues of his three albums, with special attention to the lyrics 25. You can bet that Hello (song that already exceeds half billion views on YouTube) will be the subject responsible for opening a performance that will not forget other songs from his new job as Water Under The Bridge, I Miss You, Million Years Aug, Sweetest Devotion, All I Ask or When We Were Young, an issue that usually leave for the end of the recital. No shortage songs from his 21 as Someone Like You, one of his greatest hits, One And Only, Set Fire To The Rain, Rumor Has It, or danceable Rolling in the Deep with which usually close the show. From his first album, sound pieces like Chasing Pavements, Make You Feel My Love (classic version of Bob Dylan) or Hometown Glor and the single that was released in 2007. He also lack Skyfall, the issue that made for Operation Skyfall film of the saga of James Bond.

The two consecutive concerts of Adele (24 and 25 May) will complete a great week in Barcelona for British and world pop with the presence of the band Coldplay at Estadi Olimpic (26 and 27 May) to present the tour of his new disk A Head Full of Dreams, also all sold out. Looking recital British diva has announced that TMB enabled for the two-day concert special bus service down between Palau and Plaça Espanya. Bus line 150 is also reinforced with more vehicles from six in the evening until concert time so that users can upload to the site.

The iconic brand opens in Barcelona the world’s largest store, a temple for devotees of ‘iphone’ Bikes 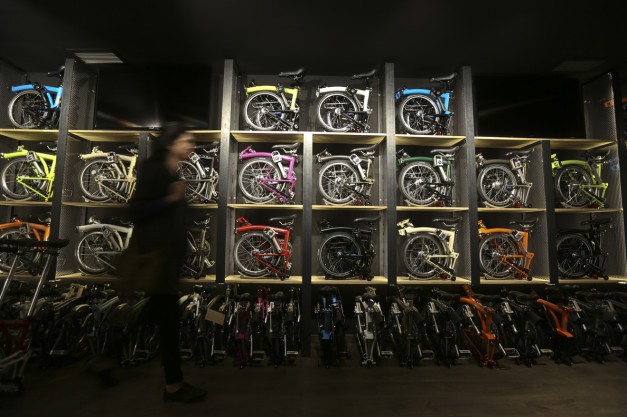 Andew Ritchie is the Steve Jobs of the devotees of the Brompton bicycles. What devotees is timely because this profession ex gardener decided the name of the bike I had in mind almost at random. That was in the late 70s From the window of the London office where he worked on the design of his invention, which Ritchie saw was the Brompton Oratory, which is popularly known as the English Catholic Church of the Immaculate Sacred Heart of Mary. It must be admitted that this second name, the officer would have had less commercial stuck if it comes pedaling. Obviously, Ritchie did not invent the folding bike, because that is essentially a Brompton, but an ingenious design and, above all, a process of handcrafting that, allegedly, ensures a lifespan of 40 years of daily use. Total, that if someone believes the ‘street fighter’ between pedestrians and cyclists is at its peak, to prepare for the next round.

Let’s recap. The number of subscribers to the Bicing has fallen gradually since the 2009 public service that planted the flag on their particular Everest. That year there were 190,000 users, or at least, that was the number of issued ID cards. The latest official figure is much lower subscribers, 96,452 this month of April. The use of bicycles as a means of transport in the city, however, grows. Barcelona round a daily average of 140,000 trips by bike. In three years this share has grown 15%. The natural conclusion is to think that the Bicing has been a rite of passage for many locals, the seed of a later flowering, but discomfort (the poor state sometimes available units, the difficulty of finding one or, worse, the inability to park it) have meant that many users prefer to have your own bike.

Although it probably has happened (sorry, but there are no official statistics on the park two wheels without engine of the city) that conclusion overlooked a very important detail such, the Brompton, the ‘iphone’ bicycles effect.

Barcelona opens today in the eleventh shop monographic world of this iconic brand. It is also the world’s largest. Things that happen in Barcelona, is not it a great surface but exhibits permanently 120 units of this folding bike, absolutely artisan, an unusual today ‘made in England’ (remember, Rolls Royce is already owned by the German BMW and Jaguar, Indian Tata), which only 50 units a day patiently assembled by hand. Be the bike James Bond if I had to and pursue the villain Ernst Stavro Blofeld in a new adventure.

The opening of a shop exclusively Brompton may seem input, a minor event, worthy of a simple journalistic press release, but the figures reveal the classic movement of magma that precedes a volcanic eruption. Barcelona is, according to Oscar Alcaraz, head of the shop, world city with the highest per capita Bromptons. It is said soon. According to the company, there is a 20,000 units in Barcelona this bike that does not stand out precisely because of its economical price. Rounding three purples bills, glups!

In the section page policy is often recounts how the separatists try to “broaden the social base of the ‘proces'”. It seems that the difficulties are greater than expected. In Barcelona, the social base of everyday bicycle users has expanded to unimagined group a few years ago, that nebulous segment of what are considered liberal professionals that they are or not, could easily be confused aesthetically with them. They discovered first with the Bicing that in a city where cars travel at 12 kilometers per hour on average, pedal, in depending on which routes, 20 kilometers per hour are reached. Then simply they decided to have your own bike, but the big plug for “Amsterdamisation” of Barcelona have always been theft. In the Dutch city, the remedy against theft, which also exist, has been opting for bicycles unappetizing for thieves. The Brompton and are scarce in Amsterdam. In Barcelona, the first bicycles to be used as a daily means of transport were mountain bikes, some 20 years ago, totally inappropriate and expensive. With them was born fear, he justified the theft.

Local puzzle solution have been heavy padlocks and parallel, folding bicycles, the use of which increases in arithmetic progression. According Alcaraz (which, of course, sweeps for home), ‘culture Brompton’ has made the leap and is no longer the only bicycle professionals. His prognosis is that polemics margin kilometers of bike lanes in the city and on the pulse with pedestrians, the use of bicycles as a means of daily transport will only grow in the coming years, especially since the next coming revolution are electric bikes. In Germany they have already sold some 500,000. In France, 200,000. In Spain are testimonials. In 2017, in a project that just details are known, the market launch of electric Brompton folding planned. It will be the ‘street fighter two’.

A unit made of ten unique Aston Martin DB10 for the last film in the series 007, Spectre, was seen for 24 hours last week in Barcelona. 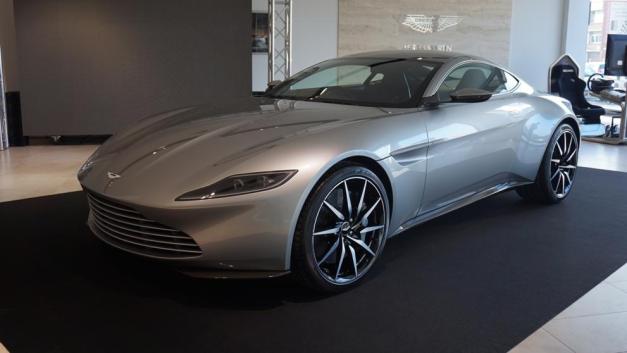 Cars Gallery, official Aston Martin dealership in the Catalan capital (located in the Passeig de la Zona Franca, 10) was the only one in Spain that has exposed in their facilities this very exclusive model, created specifically for the latest James Bond film adventure .

Designed in just five months, in addition to steal the DB10 of the role of Daniel Craig in the latest film of the famous secret agent anticipates the broad lines of the future cars of the prestigious British firm, which in 2015 celebrated 50 years since the first appearance of the legendary Aston Martin DB5 in a film 007 was in the film Goldfinger, starring Sean Connery in 1965.

To commemorate this collaboration, Aston Martin decided to make a unique and special car for Spectre, the ten unique units, all owned by the brand were built and not intended for sale. Eight of them were used in the filming, with adaptations and modifications for recording, resulting in most of them partially damaged or destroyed after the end of the driving scenes. Of the other two units, complete, intact and fully functional, one will be auctioned for charity along the other-2016 and briefly visited Barcelona on Monday December-21 has been used for promotional purposes.

Spectre DB10 measuring 4.4 meters long, 2.1 wide and 1.2 high, has very clean and streamlined shapes, and features innovative stylistic devices, such as your front inspired by the nose of a shark, vents in the hood, tilt opening, or the spectacular tires “Diamond Turned”. 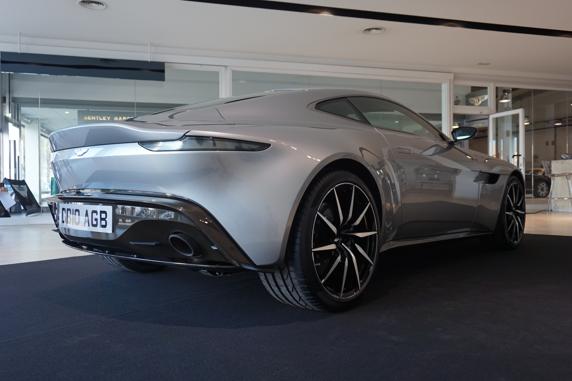 Gaydon manufacturer began in September a special tour across Europe, which closed just last week in Barcelona and that has led to DB10 Spectre to all dealers of the brand they acquired a unit of only 150 made the exclusive DB9 Bond Edition created by Aston Martin. Cars Gallery was the only one in Spain that has been able to show customers a sneak preview this car, unique in the world.