The Sagrada Família opens the sacristy

The space is included in the route

Sacristy west of the Sagrada Familia 1

The Basilica of the Sagrada Familia in Barcelona has extended the tour for visitors with the opening of the ground floor of the sacristy of the west, he has informed the board of trustees of the temple.

In the space of the cloister it has placed the ‘Way of the Liturgy’, an exhibition of pieces Antoni Gaudí designed for the Catholic liturgy. The pieces are tenebrario wrought iron candlestick two feet, a cross with candles, a lectern three sacral, a mobile chair two couches, three banks and a chair.

Moreover, within the sacristy there are two closets: one to keep the liturgical vestments worn by the celebrant and ministers of celebrations and another for the various liturgical objects such as chalices and patens. All parts that are part of the Way of the Liturgy are original or reproductions of designs by Antoni Gaudí.

37.5 meters high, on top, already it placed the bronze crown and base ring surrounding the tallest stone dome and dice glass domed give light to the interior space. We have also installed own symbolic details of this building: lamb and vendimiador represented with four medallions of 1 meter and 60 centimeters in diameter; two facing the street and two inland. 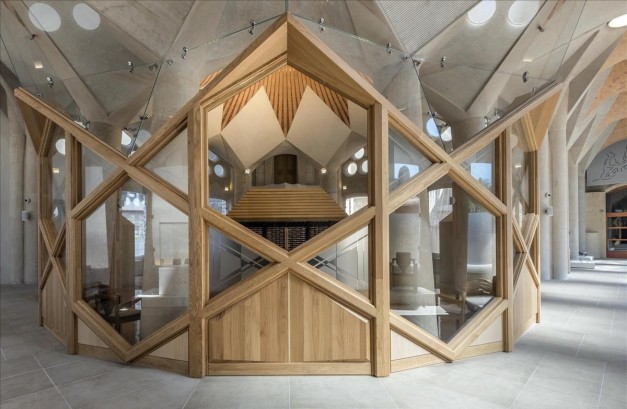 Sacristy west of the Sagrada Familia 2

STUDY OF THE TOWERS

The dome of the sacristy is made with stone from Montjuïc, but the Rams are reddish porphyry, to represent splash of wine or blood.

According to the Board, to complete the iconographic program outside the sacristy still be missing other artistic details like the palms of bronze, which will be put down as dismantling the scaffold.

Those responsible for the temple reminded that this building is very important for the study and projection of the towers, since it has the same structure, but with other parameters. The upper floors of the sacristy will go to office and uses least one plant to the parish.

Sacristy west of the Sagrada Familia 3