The artistic languages of the unconscious mark the summer of Empordà with a show that brings together Dalí and Picasso, among others

André Breton, the father of surrealism, published in 1938 Trajectoire, a compilation of dreams written, among others, by Paul Éluard, Benjamin Peret or Michel Leiris and dreams painted by De Chirico, Max Ernst, René Magritte, Man Ray or Dalí. This book is now the starting point of the exhibition L’espai dels somnis, which has been opened in the Societat l’Amistat of the Casino of Cadaqués. Dreams become artistic language.

The Mayoral gallery in Barcelona, ​​which has specialized in the art of the avant-gardes of the twentieth century, has sought this time a project that unites several artists through a common thread. And the result is a collective one about the plastic representation of the unconscious, with an exceptional list of artists headed by Dalí, Miró, Picasso, Calder, Óscar Domínguez, Chagall, Magritte, Hamilton … He has performed in Cadaqués Until August 15) and from September 14 will move to Barcelona, ​​the Mayoral gallery.

The poet and essayist Vicenç Altaió, who defines himself as a cultural agitator and idea-broker, is the curator of the exhibition. “The dream is creative,” he says as a presentation, although it was not until the twentieth century when artists began to interpret it in different ways and in a more systematic way. Sigmund Freud had a lot to do and one of his masterpieces: The interpretation of dreams. We know that Salvador Dali read it while he was at the Student Residence in Madrid, a few years before he burst into the surrealist group of Paris by contributing his paranoid-critical method of interpretation of reality. And of him are exposed five works, among which stand out the watercolor Rhino in disintegration (1950) and the drawing in ink and gouache Sewing machine with umbrella (1951).

Although the reaction of European intellectuals to World War I was nihilism and Dada art, the subsequent years – with the crisis, the consolidation of the Soviet revolution and the formation of fascism – gave rise to an art of affirmation, Which was also of subversion. Artists are, however, divided between realistic engagement and aesthetic revolt. Some, like Miró or Dalí, will stay halfway. Vicenç Altaió even speaks of a “Catalan dream”, which began the poet J.V. Foix, affirmed with Miró and Dalí and that will have continuity in Tàpies and Ponç, basic nucleus of the Dau al Set. And we could even speak of a Cadaques branch, which, in addition to Dalí, is also expressed through the almost naive dreams of the painter Àngel Planells, son of this population, also present in this exhibition, with the oil Somni oblidat, 1936 .

Not forgetting that in 1929 the group of surrealists arrived in this corner of Cape Creus, formed by the poet Paul Éluard and Gala, the gallery owner Camille Goemans and the painter René Magritte (of whom the gouache La, of 1948) is exposed here. Later on by Cadaqués, Marcel Duchamp, also author of the cover of a book of poems and photographic collages gathered under the title of La (1936), another reference of the exhibition. And Man Ray, who in 1933 will photograph the rocks of Cape Creus, on the orders of Dalí for the magazine Minotaure, which, as if it were a dream, take forms of animals and objects. In the exhibition of Cadaqués there are no photos of Man Ray, but yes in the dedicated to De Chirico that can be seen at the CaixaForum in Barcelona.

Dreams are awake, as opposed to dreams asleep or revealed, dreams about dreams. And the works of these artists establish a dialogue between themselves, with sometimes coinciding languages, divergent in many cases. In the exhibition they are from two drawings of Dream and, of 1937 – paragons of an art subordinated to the social and political needs – to the aesthetic subversion of Joan Miró in the gouache Projecte per a The vol de l’alosa or the poetic vision By Marc Chagall at Le Christ. In the same way that includes an exceptional oil of Óscar Domínguez, of 1937, titled Personnages surréalistes, with own elements of the cosmogony of Dalí or Magritte.

The exhibition has two complements: the debate held on Sunday, July 23 between Vicenç Altaió himself and filmmaker Albert Serra, moderated by Montse Aguer, director of the Teatre-Museu Dalí, and the catalog of the exhibition to be presented in Barcelona . The catalog, in English, will include the contents of this debate, a theoretical text by Altaió, an interview by Llucià Homs to the renowned art critic Hans Ulrich Obrist – who with Francesco Bonami gathered at the Venice Biennale a new generation of artists under the Project The dreams-and an epilogue by Albert Serra. “Dreams are desires, the result of a tension between the rational and the irrational,” says Albert Serra.These days the Roi soleil exhibition is also being prepared, which will focus the summer’s programming on the gallery Cadaqués, directed by Huc Malla. And the invited artist is precisely Albert Serra, who on August 12 will present a documentary about a performance in Lisbon on the occasion of the presentation of his film La muerte de. In this performance, in the Graça Brandão gallery in Lisbon, Lluís Serrat, the actor who made of Sancho in Honor of cavalry, was put in the skin of the professional actor Jean-Pierre Léaud.

Unique occasion in Barcelona, until February 5, to contemplate 63 masterpieces of the painting, from the Thyssen-Bornemisza Museum, exposed with an innovative criterion that makes them even more impressive. 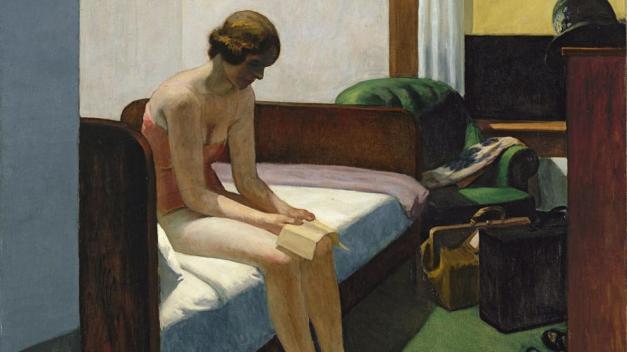 There are two months left to enjoy at CaixaForum Barcelona the Un Thyssen unseen exhibition. A new collaboration of the “la Caixa” Obra Social and the Thyssen-Bornemisza Museum in Madrid, which has made it possible to travel to Barcelona the largest selection of works that have never left their rooms.

Eight reasons not to miss it

1. By unrepeatable, since it is 63 fundamental works of pictorial art that will never return together to Barcelona. And because of these works, 42 have never been exposed in the city or have not been seen in the last twenty-five years. And because it is the first time that the Madrid art gallery authorizes such a large loan of his best works.

2. Because this “little Thyssen” is different. The works are presented in an unprecedented order that allows another perspective. Fra Angelico lives with El Greco and Marc Chagall; Hans Memling with Titian and Lucian Freud; Jan Brueghel with Gustave Courbet and Emil Nolde; And Canaletto with Camille Pissarro and Wassily Kandinsky.

3. Because it is not an anthology of the exposed painters, but a “new reading” of a fundamental part of the Thyssen collection based on five genres: “religious painting, portraiture, still life, landscape and urban landscape”. Chronological order and schools are broken, schemas are broken and authors are mixed, works are sought to dialogue with each other.

The curator of the exhibition and director of the Thyssen Museum, Guillermo Solana explains it this way: “It is a criterion that offers the advantage of being transversal and that allows to compare masterpieces that has never been seen in this way.” This “dialogue” allows, for example, exceptional comparisons. “The Annunciation” of Veronés exposed to the side “The Annunciation” of El Greco. The containment of the first along with the expressive overflow of the second.

4. Because it can be enjoyed with ironic coincidences. The portrait painted by Adriaen Thomasz Key of “William I, prince of Orange”, has by neighbor the “Portrait of a young lady with rosary”, work of Rubens. Well, William’s wife was found in flagrant adultery with Rubens’s father!

5. Because all the works of the show are of great figures, of artists of maximum level. Among them, four of the most outstanding pieces of Thyssen: “Harlequin with Mirror”, by Picasso; “Hotel Room” by Hopper; “Clouds of Summer” by Nolde and “The brook Brème”, by Gustave Courbet that, according to Commissioner Solana is: “The best painting of the nineteenth century in the museum.”

6. Because pictures, like books, are an inexhaustible source of experiences. As many times as you look, so many discoveries of new facets, impressions, feelings.

7. Because CaixaForum Barcelona offers its visitors the possibility of commented visits to the temporary exhibitions and the modernist building with the accompaniment and guide of an educator of the center.

8. And because, in addition to family visits and coinciding with the Christmas holidays, there are family shows, such as “For Christmas, Tales of the World”, “Concerto a tempo d’umore” and “The Trojan War”. A cultural visit in a day for the whole family.

Sold a work of the Catalan painter born in Barcelona, Joan Miró for 20.5 million euros at an auction in London

The work “Painting (women, moon, birds),” a 1950 oil painter was sold at Christie’s auction house in a surreal art.

The work “Painting (women, moon, birds),” a 1950 painting of the Catalan painter Joan Miró, was sold today at Christie’s in London at an auction of surreal for 15.5 million pounds (20.5 million euros, or $ 23.3 million), well above the estimated price.

The fabric, 1953, employs some of the most recurring elements of catalan painter in the 1950s, such as birds, trees, sun and moon.

The auction on Wednesday was described by the expert from the London house in modern art, Olivier Camu, as “the best group of works by Miró to hit the market in a single sale”.

Of the six works of the Catalan painter on sale today only “L’échelle de l’évasion” did not reach the estimated price of between 3 and 5 million pounds (4 and 6.6 million euros or 4.4 and $ 7.4 million).