The fair of the classic game returns to Barcelona

The exhibition, to be held on 14th and 15th November at the Maritime Museum, proposes a trip to the legendary 80s and 90s 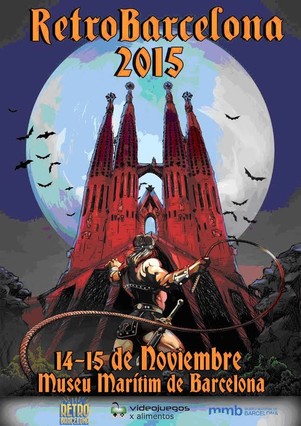 In just two editions, RetroBarcelona, ​​the fair of the classic game, has been consolidated as a reference event of the sector and prepare for what will be his third staging will take place at the iconic Maritime Museum of Barcelona, ​​the next 14 and 15 November in the Sala Marqués de Comillas of Drassanes (1700 m2 space that was born after the enlargement of the Gothic buildings of the seventeenth century).

For this third edition, RetroBarcelona offers a journey in time through the decades of the 80s and 90s, with the goal of returning to enjoy all the technologies and games that marked those years. To achieve this it will have new exhibitors and conference area, isolated from the main campus, with presentations by specialists as Alfonso Azpiri, Andrés Samudio, Bruno Sol “Nemesis” Marcos Garcia “The Elf”, Jaume Esteve, José Manuel Fernández ” Spidey “or Pep Alicante, among other innovations that have not yet been disclosed.

They are scheduled various activities such as play areas with games consoles, computers and gaming machines. Retrobarcelona also feature the presence of systems that were not in previous editions and organizations that have decided to join this celebration of the classic game.

On the agenda there will be tournaments, play areas and arcade, market, retro-themed radio programs live by The Vintage Club, Pulpofrito, The World of Spectrum or replaying people.

There will also be, once again, the initiative Food Games organized by ASUPIVA, with the aim of collecting non-perishable items for the needy in exchange for video games. A proposal last year got more than 4,000 kilos that were donated to the Banc d’Aliments de Barcelona.