The fascinating Ming Dynasty in the CaixaForum Barcelona 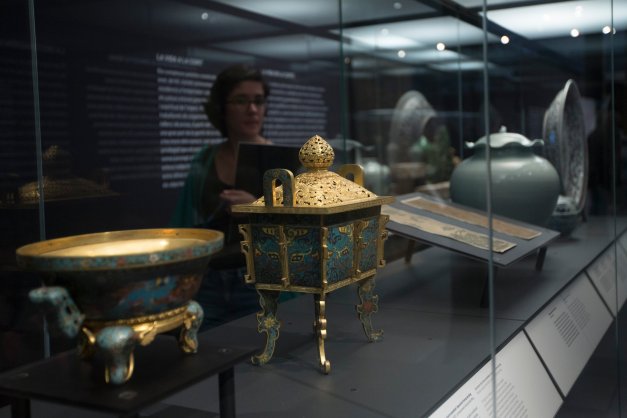 A total of 126 pieces of first order, which reflect how society, culture and art of the fascinating Ming Dynasty, which dominated China between 1368 and 1644 was exhibited for the first time in Spain from tuesday, in the exhibition which opens at CaixaForum in Barcelona.

In partnership with the Nanjing Museum, the first great National Museum of China, the British company Nomad Exhibitions has organized this exhibition, which previously has been seen in Rotterdam and Edinburgh, and as he pointed the director of Nomad Exhibitions, Tim Pethick, goes far beyond the iconic Ming vases.

The audience that comes close to the esplanade of Montjuïc discover, nothing more start the exhibition route, which “Da Ming” means “great light” and that the dynasty led a total of sixteen emperors, who helped change their country forever, both demographically he went from a population of 65 million people to another 175- and economically, since the exchange was abandoned and opted for the money.

As emphasized this morning the Deputy General Director of the Foundation “la Caixa“, Elisa Duran, it is a “remarkable for the quality of the works on display and the exhibition discourse and collections shows that are given to know, coming out first of Nanking, the so-called southern capital of eight million people, and where the dynasty was founded. ”

Ming. The golden rule emphasizes both a censer ornaments enamelled copper, Jingtai Reign (between 1449-1457), as it focuses on ritual objects, integral part of court life, and displays the 13.5 meters from a roll – something that does not happen for space at the Museum of Nankíng- on the lives of women of senior officials, who in his spare time even played a kind of football.

The exhibition is divided into four areas, the first of them devoted to what happened in the palaces and behind the walls, where you can see the luxury of the objects of life in the court or the invention of new procedures for porcelain production.

In the section called “ideal society”, central in the exhibition, describes how the ideal society of the Ming Dynasty was based and organized in a hierarchy of four classes: officials, men with a formal education, farmers and artisans and merchants. Copies of a civil service entrance exams to help explain the difficulty involved get a charge, while various objects highlight the importance of the arts of calligraphy, poetry and painting.

The lives of women, on the other hand, is governed by the three obediences: first must obey the father, then her husband and, finally, the son, considering that they should be the ones that had to sustain morale in a changing society. In the field ‘Good Life’ are the changes in the “ideal society” and how the Ming adapted to the new reality, product manufacturing and trade. Art, culture, the most beautiful, became consumer goods, as were accumulating immense private wealth.

The exhibition serves to highlight the so-called scholars and artists or scholars, especially the four masters of Wu School Shen Zhou, Wen Zhengming, Tang Yin and Qiu Ying. In China they have a very important role and their works have the same acceptance in the West may have artists like Claude Monet or Manet Edouard. In this part of the exhibition, paintings are displayed and can check the level of complexity of the lawyers practicing artists in the “three perfections”: poetry, calligraphy and painting. ”

The last of the areas reflects China’s relationship with the other continents, and a drawn hand-printed map made by the Italian priest Matteo Ricci, who joined in Macao in 1582, and that evidence, the Ming empire version is displayed in the center of China’s growing connection with the world.

Indeed, the deputy director of the Nanjing Museum, Qizhi Wang, has been this excited Tuesday because in Spain can meet all these works and has advocated for trade with his country will continue and that there “can also see western parts” .

The exhibition will be at CaixaForum until next October 2, also it calls at the cultural centers of this institution in Palma de Mallorca and Zaragoza.

The Barcelona museum this fall hopes to become “a little Louvre, to host two exceptional projects”

The drawings by Charles Le Brun for Versailles, the masterpieces of the Philipps Collection and Ming dynasty will be the protagonists of the exhibitions of the 2015-2016 season at CaixaForum Barcelona.

The Deputy Director General of the Caixa Foundation, Elisa Duran, explained in the presentation of the season “CaixaForum Barcelona this fall will be a little Louvre, to host two exceptional projects.”

Versailles drawing show for the first time since the eighteenth century, cartons and drawings that made Charles Le Brun to decorate the Hall of Mirrors and Staircase of the Ambassadors of the Palace of Versailles, which have been restored thanks to the entity Barcelona bank.

This exhibition will be presented in Barcelona between the months of November and February before exhibition in Madrid and Paris, bringing together 30 cartons of large format 1: 1 scale.

The second project in collaboration with the French museum, Animals and Pharaohs, and exhibited at the headquarters of Madrid, meet from September 23th until January next 430 works and objects only to detail the role and significance of the animal figure in the ancient Egypt, including 14 mummies of cats, dogs, sheep, ibis, hawks, fish, crocodiles and snakes.
In the spring of 2016, the biggest names in the history of art will be installed in Barcelona in the exhibition Masterpieces of Impressionism and modern art at the Phillips Collection, with 60 paintings by Goya, El Greco, Manet, Corot, Courbet, Sisley Van Gogh, Degas, Picasso, Modigliani, Kandinsky, Pollock and Rothko.

With Ming: the golden rule (June-October 2016), CaixaForum will announce the art and culture of the Ming Dynasty, which dominated China for nearly three centuries, between 1368 and 1644, a time when 16 emperors promoted a complex system imperial, expanded social structures and boosted the economy and consumer culture, which resulted in an increase in population from about 65 to 175 million people. This exhibition will see more than one hundred objects from the collections of Nanjing Museum, including ceramics, paintings, jewelry, textiles and works of enamel, gold and porcelain.

The photograph will be displayed in the season by Philippe Halsman with Surprise me! (July-November 2016), a comprehensive retrospective that will affect your relationship with thirty Salvador Dalí and his numerous portraits show jumping celebrities such as actresses Marilyn Monroe and Audrey Hepburn, as part of its popular series jumpology .

In the contemporary context, Duran has highlighted two projects: a large exhibition curated by artist Juliao Sarmento from the collections of La Caixa, the MACBA and the Gulbenkian Foundation (Portugal), and the second edition of “Comisart” cycle three exhibitions in which young curators offer refreshing readings on the current art from the funds of the entity.

Elisa Duran reported that seven CaixaForum in Spain received 2.3 million visitors and have hosted 27 exhibitions. The headquarters of Barcelona last season 2014-15 received a total of 813,000 visitors, 8% more than the previous.
Duran said “for reasons of agenda,” except for “Animals and Pharaohs”, the rest of the exhibits will begin in Barcelona.

La Caixa Foundation has a budget of 500 million, two thirds of which will be devoted to the social sphere and $ 100 million for cultural and scientific dissemination, which includes exhibitions, construction and maintenance of schools.