At times, the ghost hovers 2-6 the Santiago Bernabeu. The superiority of Barca was awesome and the impotence of Madrid, worried for his own. The first course was just classic Barca color. Luis Enrique Benitez danced, who could only chew gum and look away. A recital that, to make matters worse, Messi witnessed the bench start. A historic victory, without discussion.

The “pañolada” and whistles to the Bernabeu fired his team when Fernandez Borbalán decreed rest, spoke for themselves. “Florentino, resign!” He cried the Madrid fans a far cry unprecedented in Chamartin. 0-2 Barca superiority in the game and the set target impotence provoked the ire of Real Madrid. And all with Leo Messi on the bench warm.

Benitez betrayed its principles and Barca punished him. It decided align all its stars from the beginning to the surprise of friends and strangers.

Eleven had signed a self Florentino Perez, but that is a far cry from the ideas of Benitez. Casemiro, his big bet and one of the banners of their midfield, gave place to the stars. And Luis Enrique was able to use it perfectly.

Messi started on the bench and Barca coach decided to place as Sergi Roberto theoretical companion Neymar and Suarez. A deceptive position, since the work of the youth squad Marcelo canceling his band was incalculable. In attack, Reus also contributed a lot in the game and control the club. Moreover, his appearances in the attacking half from the second row surprised the Madrid defense.

Five minutes lasted gasoline to Madrid, momentum and pressure are over soon, once the club he happened to settle on the field and begin to dominate the ball. Barca played a long combination ended with the ball at the feet of Sergi Roberto, who in two strides to the center of Madrid overcame field and a pass freed Luis Suarez to batiera Keylor with the outside. No hesitation, I would say the dictionary. Whistles Pique Bernabeu began to mutate into boos at Madrid itself.

The strength of the whole Benitez in this initial stage of course was based on the success of Keylor Navas, not the whole game around. When the Costa Rican has dropped a notch in performance, as expected, the defense white is showing all its miseries.

The goal gave Barca tranquility, who became lord and master of the classic with a crushing authority. The Madrid was limited to running after the ball and throw racing aimlessly when he stole without creating any danger. The Catalans, however, matured plays and tired opponent. Sergi Roberto was unable from the penalty spot as Luis Enrique and sang goal on the bench, just before the change and asked Mascherano cede his place to Mathieu.

The Bernabeu burst before the break, when Neymar, who had been dubious position Iniesta, Navas beat again. The scorer was based as such and stand took his mask and began to whistle his team mercilessly. The sound of wind that became shouts of “resign” Florentino break, after Marcelo save a goal sung by Luis Suarez.

Compelled by the situation, the Madrid stormed out in the second half. In three minutes, the players Benitez created more danger in the first 45 minutes. Bravo was key at the time. But the white souffle collapsed suddenly when Iniesta hit the heel of Neymar and placed the ball in the corner of the goal from Madrid. Benitez looked down, his team was a caricature, and the Bernabeu burst of impotence. A few meters further, Luis Enrique nodded and Argentine with 10 on his back he prepared to enter the field. Purl, I would say again the dictionary.

The setting was perfect for Barca, who could turn your ride into a bloodbath. The Madrid defended not only attacked his heart, not his head.

Bravo you pulled a goal sung Christian, so desperate lately, including another attack without the ball without penalty. Messi led the recital almost at a trot, and the danger is sensed in each robbery. A triangulation between Argentinian and Alba ended with Suarez in front of Navas. There was no remedy, the fourth up to the scoreboard while the stands emptied.

Barça display at the Bernabeu and occupy a space from gold in Barca history books. A superiority which can cause a real earthquake in Madrid and consolidates the growing project of Luis Enrique. The “Messidependencia” is long gone.

Barca arrives as leader to the Bernabeu, but that does not mean anything in a game that many variations come into play 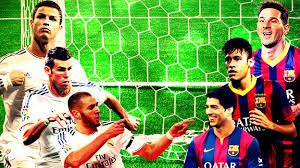 The Argentine presence on the lawn of the Bernabeu can become the decisive factor of the classic. Tier hatred is inversely proportional to the Argentine love these games. It is the top scorer in the history of Barca-Madrid and exhibits at the Madrid stadium are particularly legendary. In fact, Leo has seen more often in house door rival in the Camp Nou itself. So recovery is the best argument that can be Luis Enrique to win in Madrid. Nevertheless, it seems that not until last when a decision on its presence in the call is taken, which can result in hundreds of speculation.

Barring a few exceptions and historic, classic games are very close, which are decided by small details. In these meetings, the effectiveness front door is essential. And this is where the inspiration for the classic front decide and who knows if also titles. Beyond Messi, Neymar and it is clear that Suarez faced the visit to the Bernabeu in a sweet moment in this regard. Quite the opposite happens at Real Madrid. Extra leave sporting matters in the air performance of Benzema, Cristiano is far from his best and Bale is too irregular. But all this means nothing and the visit of Barca is the best incentive to regain their best game. The effectiveness will be decisive.

Costa Rican goalkeeper has completed a first tranche of season almost immaculate. His stops have given points to Real Madrid, has been decisive. It has cleared all doubts suddenly flying over the goal Bernabeu after the departure of Casillas. Very complicated mission, just short of a great goalkeeper. A similar situation that crossed Claudio Bravo at the club last year and also solved with remarkable success, Valdes is already past.

An injury Keylor has removed the last two league games, which has itself generated Box doubt. His return to the classic face would be a breath of fresh air for Rafa Benitez.

Barca can play better or worse, but in most games one can predict what will be your approach without too much risk of being wrong. Luis Enrique’s team likes to be protagonist, have the ball and be more vertical than in past seasons. Benitez In Madrid, the bet is not so clear. His team has moments of lucidity during games, but lacks much continuity. And often it gives the feeling of stepping back when he takes the lead and, for example, against Atletico Madrid ended up paying him. In Seville, in the last league match, and something similar happened Emery’s team finished passing over whites. The classic is always a different rest day, but the talk of Benitez can tip the balance before kick-off.

Luis Enrique made history during his first season at Barca bench achieving a historic treble. A success founded on the excellence of Messi, but also in a defensive line that you drew from many troubles. Bravo and they grew Ter Stegen in goal-Mascherano and Pique partner formed an impenetrable wall. In the first section of this course, the problems have been the dominant feature over a club with some doubts. Especially Pique has not started well but begins to show signs that he is singing. No longer loses focus and becomes short of the best plants in the world, as it is assumed. Regain that strength is one of the primary missions for Luis Enrique, if you want to take something from their visit to the Bernabeu.