The Ancient Synagogue of Barcelona is believed to be an ancient synagogue located in the centre of Barcelona, Catalonia, Spain. It has been described as one of the oldest synagogues in Europe. After many centuries of use for other purposes, the building re-opened as a synagogue and museum in 2002. No congregation prays regularly at the Sinagoga Major, but it is used for festive occasions.

Archaeological investigations show that the original structure of the building was built in the third or fourth century; whether this structure was the synagogue cannot be said with certainty. The building was significantly expanded during the 13th century. Medieval Barcelona is known to have had several synagogues, and the main synagogue was certainly in the immediate area. King James I visited the synagogue in 1263 at the conclusion of the Barcelona Disputation. Shlomo ben Aderet served as the rabbi of the Sinagoga Major for 50 years.

The Jews of Barcelona were massacred in 1391. The building has been used for many purposes and its original use was forgotten. Over the centuries, additional stories were added to the building.

Riera’s work led Miguel Iaffa to examine the exterior of the building. Iaffa noted that the structure had been built in compliance with religious requirements that the building should face Jerusalem and that it should have two windows. In fact, the eastward orientation of the building (toward Jerusalem) broke with the northwest/southeast alignment of the streets in its neighborhood. 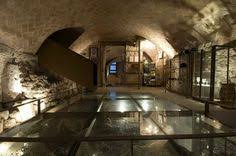 Iaffa purchased the building in 1995 when its owner put it up for sale. The Call Association of Barcelona (Catalan: Associació Call de Barcelona),  led by Iaffa, undertook the recovery and restoration of the synagogue.The Sinagoga Major was opened to the public in 2002, and it drew 20,000 visitors during 2005.

In 2003, two Canadians became the first couple to be married at the Sinagoga Major in more than 600 years. A New York attorney donated a 500-year-old sefer Torah (Torah scroll) to the synagogue in 2006.